Welcome to our Monday Memes, in which we celebrate the books received, as well as those read.  We also share out reading plans for the upcoming week.

Mailbox Monday is hosted in February by Library of Clean Reads.

What Are You Reading? is hosted by Book Journey.

My book receipts were all purchases by me, and included four print books and two e-books. 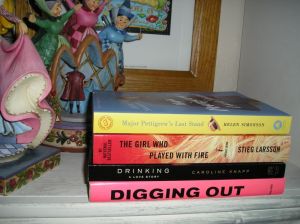 In her witty and wise debut novel, newcomer Helen Simonson introduces the unforgettable character of the widower Major Ernest Pettigrew.  The Major epitomizes the Englishman with the “stiff upper lip,” who clings to traditional values and has tried (in vain) to pass these along to his yuppie son, Roger. The story centers around Pettigrew’s fight to keep his greedy relatives (including his son) from selling a valuable family heirloom–a pair of hunting rifles that symbolizes much of what he stands for, or at least what he thinks he does…

2.  The Girl Who Played With Fire, by Stieg Larsson

Stieg Larsson’s seething heroine, Lisbeth Salander, once again finds herself paired with journalist Mikael Blomkvist on the trail of a sinister criminal enterprise. Only this time, Lisbeth must return to the darkness of her own past (more specifically, an event coldly known as “All the Evil”) if she is to stay one step ahead–and alive. The Girl Who Played with Fire is a break-out-in-a-cold-sweat thriller that crackles with stunning twists and dismisses any talk of a sophomore slump.

The roots of alcoholism in the life of a brilliant daughter of an upper-class family are explored in this stylistic, literary memoir of drinking by a Massachusetts journalist.

4.  Digging Out, by Anne Richardson (Roiphe)

When good-time, fortysomething Molly Lane dies of an unspecified degenerative illness, her many friends and numerous lovers are led to think about their own mortality. Vernon Halliday, editor of the upmarket newspaper the Judge, persuades his old friend Clive Linley, a self-indulgent composer of some reputation, to enter into a euthanasia pact with him. Should either of them be stricken with such an illness, the other will bring about his death. From this point onward we are in little doubt as to Amsterdam‘s outcome–it’s only a matter of who will kill whom….

Simpson’s pragmatic and delightfully observant nanny Lola shines in this story of contemporary child rearing. Critics did find Claire, with her privileged lifestyle and chronic self-doubt, a slightly less compelling character. And, in stark contrast to all other critics, the Philadelphia Inquirer reviewer found the novel disorganized, repetitive, and filled with exasperating characters. While a few readers may not find My Hollywood to their liking, most should find it an entertaining and heartfelt addition to Simpson’s body of work….

This week, I’ve enjoyed some blogging, as well as reading.  Here are some of my favorites:

Booking Through Thursday:  Something Old & Something New

1.  The Paris Wife, by Paula McLain

2.  The Book of Tomorrow, by Cecelia Ahern

3.  Hardly Knew Her, by Laura Lippman

1.  Facets, by Barbara Delinsky (on my TBR stacks) 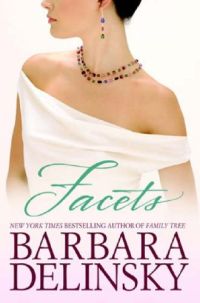 Delinsky’s ( Heart of the Night ) new tale demonstrates that even when revenge isn’t sweet, it still makes palatable reading. Writer Hillary Cox has been exceptionally patient and discreet during her 27-year affair with mining and jewelry magnate John St. George, a man who is, as they say, not the “marrying kind.” Thus, when John announces on television that he has become engaged to another woman, Hillary’s thoughts turn to equally public revenge: she decides to write a biographical expose of his personal and business life….

Life in Marblehead has had a pleasant predictability, until Diesel arrives. Rumor has it that a collection of priceless ancient relics representing the Seven Deadly Sins have made their way to Boston’s North Shore. Partnered with pastry chef Lizzie Tucker, Diesel bullies and charms his way through historic Salem to track them down—and his criminal mastermind cousin Gerewulf Grimorie. The black-haired, black-hearted Wulf is on the hunt for the relic representing gluttony. Caught in a race against time, Diesel and Lizzie soon find out that more isn’t always better, as they battle Wulf and the first of the deadly sins….

You don’t have to have a sister or be a fan of the Bard to love Brown’s bright, literate debut, but it wouldn’t hurt. Sisters Rose (Rosalind; As You Like It), Bean (Bianca; The Taming of the Shrew), and Cordy (Cordelia; King Lear)–the book-loving, Shakespeare-quoting, and wonderfully screwed-up spawn of Bard scholar Dr. James Andreas–end up under one roof again in Barnwell, Ohio, the college town where they were raised, to help their breast cancer–stricken mom. The real reasons they’ve trudged home, however, are far less straightforward: vagabond and youngest sib Cordy is pregnant with nowhere to go; man-eater Bean ran into big trouble in New York for embezzlement, and eldest sister Rose can’t venture beyond the “mental circle with Barnwell at the center of it.” For these pains-in-the-soul, the sisters have to learn to trust love–of themselves, of each other–to find their way home again….

4.  The Three Weissmanns of Westport, by Cathleen Schine

A geriatric stepfather falls in love with a scheming woman half his age in Schine’s Sense and Sensibility–flecked and compulsively readable follow-up to The New Yorkers. Betty Weissman is 75 when Joseph, her husband of nearly 50 years, announces he’s divorcing her. Soon, Betty moves out of their grand Central Park West apartment and Joseph’s conniving girlfriend, Felicity, moves in. Betty lands in a rundown Westport, Conn., beach cottage, but things quickly get more complicated when Betty’s daughters run into their own problems….

So that’s it for the week!  I think I’ll be busy reading these…and hopefully I’ll get some writing done, too.  What do you have on tap for the week?  Hope you’ll stop by and share….

Oh…except I have added this photo of the new bookshelf I bought yesterday…with a few books on it….