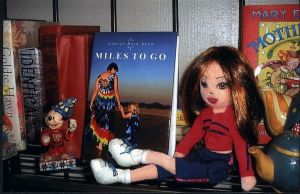 Miles to Go was the first novel I started to write, even years before the others.  In the beginning, it consisted of notes in a journal.  Later it would be the one I struggled over, tweaked endlessly, and then, finally brought out after three previous novels.

It’s the story of two women who meet in college, formed a friendship cemented by the bonds of their radical causes and dreams for a better life, and persisted over the next three decades.

Here on these pages, I will share excerpts from the book, thoughts about the creative process, and character interviews.

As she ponders the negative memories from the past, Karen Kendall makes a choice to focus on the good in her life in the moment.  Excerpted from Miles to Go.

She could still remember very clearly the times when she had known she was about to be moved from a foster home.  The foster parents would be distant, walking around the house, carefully avoiding her, not looking at her directly.  Then would come the apologetic “We need to talk,” followed by the gathering together of her things in those large, black trash bags.  That was the worst!  So humiliating, to have everything that was yours, usually so little, bagged up together into three or four giant trash bags.  Sometimes she would come home from school and find that her things had been packed already.  That would be the clue to a terse and hasty departure.   And sure enough, within the hour, the social worker would appear in the inevitable county car, cheerfully greeting her, as if they were going on an adventure, and, usually without any explanations, she’d be off to the next home.

Sometimes there would be no foster homes and she’d have to stay in the children’s shelter, with impersonal staff.   In some ways, this was better.  At least they didn’t pretend to want her, didn’t show her that false welcome.

Now, breaking into a slow jog, Karen turned the corner onto 24th Street; she stayed on this course for a little while and then doubled back.  As she reached Donner Way again, she reveled in her enjoyment of this street, centered by a grassy strip, punctuated by large trees.  Arriving at the front door marked “2445,” she stomped her feet slightly, then removed her sneakers.  She glanced up at the brick façade and took in the dark green shutters alongside each window; her eyes trailed upward to the top floor…Hers and Ashley’s…And she inhaled gratefully.  She had something great right now and she mustn’t spoil it by these negative memories!  Even though she still didn’t feel as if she truly belonged in this new life, she continued to wake up each day, here in this home, greeted by Rainbow, who was warm and loving…What more could she ask?

A young woman who disappeared from one life many years ago is now ready to resume that life.  An excerpt from Miles to Go.

EUGENE, OREGON:  1998
A processional slowly moved down the aisle to the sound of “Pomp and Circumstance.”  Autumn Phillips took her place in the line, glancing toward the audience periodically as she traversed the distance to the stage.  At long last, she was receiving her graduate degree in social work.  Her path to this place had been long and arduous, complicated by a number of things, not the least of which had been the abrupt move from Seattle four years before.  She had resumed classes at Oregon State University, receiving her bachelor’s degree after the winter session in early 1995 and immediately began her graduate work.  So here she was, finishing it all up after the winter session.  Despite the smaller ceremony, she was so happy that she had finally achieved this goal.

She caught a glimpse of her mother in the middle section and smiled broadly.  She knew that all of this had not been easy on Zoë, who had had to disrupt her career twice already because of Autumn’s situation.  But now things were finally going to pay off!  Autumn had sent her resume to several agencies in Oregon and California.  She had set up some interviews in San Luis Obispo and Fresno.  Never having been to either place, she thought that the San Luis Obispo openings sounded better.  It was a small town along the coast and not that far off Highway 101, which led straight to LA!   But she would consider both possibilities:  either one would put her in the catbird seat when the time was right.

As she approached the stage, she thought about all that this night symbolized:  the culmination of her studies, of course; but, also, the end of her powerlessness.   As she stepped up to accept her diploma, her classmates and strangers in the audience alike saw a beautiful, glowing young woman, confidently poised to begin her life.

Zoë Phillips saw a young woman on a collision course, about to come face to face with her past.