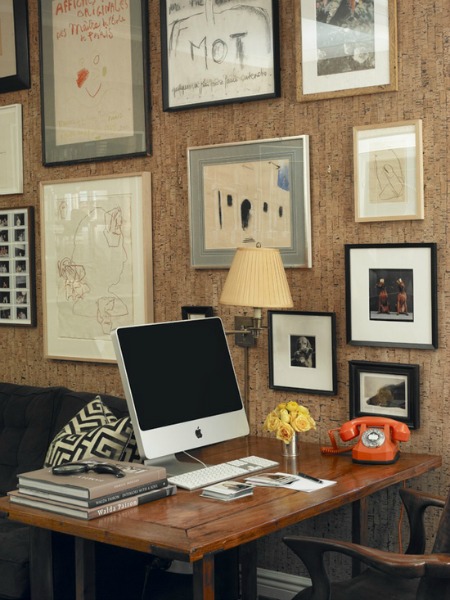 Tensions arise between Martha and her assistant after Zach comes back into the picture.  Excerpted from Interior Designs.

When I returned from lunch, Caroline was in her little office working away.  She didn’t even look up when I peeked in; almost as if she were avoiding me.

“Hi, Caroline.  Anything happening I should know about?”

When she glanced up at me, her cheeks turned red.  As if she were hiding something.  But I decided not to put her on the spot, and just waited for whatever updates she’d provide.

Standing up, she moved toward me with a stack of pink message slips, which she just handed to me.  Usually she gave me some kind of overview, in order of priorities, but she had nothing to say.

Back at my desk, I soon forgot her reaction and busied myself with some new sketches.  Then I checked e-mails, and that’s when I saw Zach’s.  I felt my face heat up as I read the message:  Hi, gorgeous, looking forward to more between us….I quickly exited the message, and as an afterthought, decided to delete it.  Not that anyone would be checking my e-mails, but I didn’t want to even consider the possibility that others (meaning Caroline) might stumble upon it.

Nor did I reply to it right then.  Something inside my battered heart told me to keep him waiting.

Even though I had vowed to avoid game-playing—where had games gotten me in my marriage battles?—but I also had to protect my heart.  And sometimes games were the only methods that would do just that.
***
Caroline couldn’t wait to escape the office that day.

As much as she told herself that Martha had first dibs on Zach, she also remembered that she and Zach had a date for this very weekend.  Was he playing some kind of game, or had Martha misinterpreted the lunch she had with him?  But there was no way she could have missed Martha’s slightly disheveled look when she’d returned.  She had that “just been kissed” badge stamped on her face like a tattoo, which puzzled Caroline.  The Martha she’d always known would have polished up her visage, erasing all traces of whatever had transpired between her and Zach.  So was she hoping Caroline would notice?  Did she suspect that something might be happening between her and Zach?

But how could she?  Zach certainly wouldn’t have told her.  No, it was her guilty conscience.  Which made her recall, once again, that she had done nothing wrong.

Driving home, she felt like the “other woman,” even though she knew she shouldn’t.  Nothing had actually happened between her and Zach.  They’d run into each other in a restaurant, had an impromptu meal, and agreed to go to the movies on Saturday.  Did that sound like the beginning of something?  It did to her, but then again, she hadn’t actually started anything with him…yet.  So time would tell what would actually develop.

How on earth did she turn into this person who questioned her every action?

She knew that Martha had been through a horrendous experience with her ex-husband; before he’d been an ex, he’d put her through the wringer.  Her boss had confided some of it to her, but only after it was actually over.  It was like she’d hung in there, fighting like a trooper, and finally had to give up.  That kind of experience really stomped on a person’s ego, especially someone like Martha who had believed she had the perfect life.

When that happened, you had to question everything you’d ever believed about life, love, and marriage.

Caroline had her own rules for relationships.  Never put a man ahead of your friendships with other women; never sit by the phone waiting for that call; and never, ever poach another woman’s man.

But what determined “ownership,” anyway?

As she pulled into her garage, she pondered this idea for a few moments, while the garage door slid shut behind her.  She quickly opened the back door and entered her space, glancing around, as if to assess any damage done to her abode while she was gone.  This habit had developed when she was living with her last boyfriend.  Or when he was actually mostly living here.

As much as she’d enjoyed his company—at least in the beginning!—she’d come to resent how he treated her space.  As if her beautiful surroundings were his personal dumping ground.  The coffee table had always been littered with books, magazines, and an overflowing ashtray.  Beer cans dotted almost every available surface, while whatever clothes he’d worn that day managed to layer the floors, like some kind of statement.  Of what, she wasn’t sure.  Maybe his statement was that he couldn’t be bothered to pick up after himself; that she was his personal servant; or even worse, that he didn’t even notice what he was doing.

That’s when she’d realized that their relationship would end…and soon.  Was it because she was a frustrated interior designer, working around beautiful environments by day?  Or did she imagine her space as something that “spoke” to those who entered, and therefore conveyed some kind of personal message?

At first, she’d felt mean and even a little disturbed by what these feelings said about her.  But soon she’d realized that she had every right to feel the way she did.  She’d tried to nudge Derek into some kind of neatness, but he’d only studied her with a weird expression, as if she had dropped into his view from another planet.

They’d finally had some big fight about something she couldn’t even remember now, but she knew that it was only the last straw.  The one that broke the camel’s back.