Welcome to another Tuesday celebrating bookish events, from Tuesday/First Chapter/Intros, hosted by Bibliophile by the Sea; and Teaser Tuesdays hosted by A Daily Rhythm.

Let’s have some fun!  Today I am spotlighting a book from an author who is rapidly becoming a favorite:  Sarah Pekkanen, and her book Catching Air, a story that turnings an unflinching eye on the tangled relationships of two pairs of thirty-somethings. 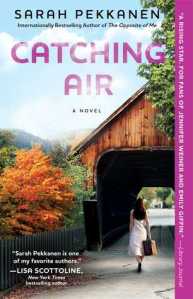 Intro:  Dawn Zukoski was scared of lots of things—spiders, lightning bolts, the way New York cabbies drove—but only once in her life had she known true terror.

She was eight years old back then, and visiting her elderly neighbor.  Mrs. Rita’s home was cluttered with gold-framed photos of her long-grown children and towers of Reader’s Digest magazines, and it smelled of dog pee from her two yippy terriers.  But Dawn loved going there because the cookie jar was stocked with Nilla wafers, and the television was always tuned to game shows.

Lacy curtains over the windows hid the sight of other kids on the street playing kickball or hide-and-seek on summer mornings, but Dawn could hear their shouts and cheers.  She didn’t care, though; she and Mrs. Rita were busy competing in their own games of Plinko or One Away.

Teaser:  Then Mrs. Rita let out a whoop and clapped her hands sharply—”He landed smack-dab on the one dollar!  Did you see that, Dawn?”—and at the sudden noise, the spell was broken and the dogs charged.

Dawn fell backward, cookies spilling all around her.  “No!” she could hear Mrs. Rita yelling from what seemed like a great distance away.  Dawn thrashed and screamed, but every time she pushed one dog away, the other found its way forward, raking her face with its teeth.  The attack seemed to go on forever. (p. 2).

(I just had to include a couple of paragraphs to convey the frightening situation in its entirety).

Blurb:  A chance to run a B&B in snowy, remote Vermont—it’s an offer Kira Danner can’t resist after six soul-crushing years of working as a lawyer in Florida. As Kira and her husband, Peter, step into a brand new life, she quells her fears about living with the B&B’s co-owners: Peter’s sexy, irresponsible brother Rand, and Rand’s wife, Alyssa…who is essentially a stranger.

For her part, Alyssa sees taking over the B&B as the latest in a string of adventures. Plus, a quiet place might help her recover from the news that she can’t bear children. But the idyllic town proves to be anything but serene: Within weeks, the sisters-in-law are scrambling to prepare for their first big booking—a winter wedding—and soon a shy, mysterious woman comes to work for them. Dawn Zukoski is hiding something; that much is clear. But what the sisters-in-law don’t realize is that Dawn is also hiding from someone…

Relatable and dynamic, Catching Air delves deeply into the vital relationships that give shape to women’s lives.

What do you think?  Would you keep reading?  I am eager to find out what happens.

44 thoughts on “FROM THE INTERIOR: EXCERPTS FROM “CATCHING AIR””