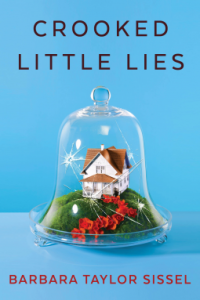 Lauren Wilder is the first character we meet in “Crooked Little Lies,” as she drives on the interstate feeder, having taken a wrong turn. We can immediately feel that something is wrong with her…there is a disorientation, a confusion, so when she describes the man she sees walking along the road, the fact that he is familiar to her is not that unusual.

Bo Laughlin is a familiar character to the residents of the small Texas town, Hardys Walk, and his quirkiness is sometimes more pronounced than at other times. But one thing is true: he is the stepbrother of Annie Beauchamp, a young woman who works in the café in town, and the two of them have something in common: their mothers are dead.

What we will learn about Lauren will change everything about how we view her. Can we believe any of her thoughts and perceptions? The man she sees, and how she watches him get into a strange car, could have been an imagining…but then someone else, Cooper Gant, saw the same thing. Where is Bo now, and is he in danger?

Meanwhile, as more of Lauren’s past comes to light (the horrible accident that left her with a brain injury and memory issues, and her subsequent abuse of pain pills), we can understand some of what she is experiencing. She is clean now, but her husband Jeff is like a hall monitor with her, and sometimes his approach seems insulting. Could he have been manufacturing some of the episodes he tells her about? Was Jeff just stressed out, or were his unlikeable characteristics just the tip of the iceberg? Were Lauren’s two kids, Drew, 14, and Kenzie, 11, at risk?

Then there is Tara, Lauren’s sister, whose involvement with Greg, a known drug addict, could be somehow connected to what happened to Bo.

The more characters I met, the more suspicious I was of everyone, and before everything finally came together, I suspected that the shadow of suspicion cast on Lauren would turn out to be someone’s trick. But whose?

As the events unfolded, the suspense kept me rapidly turning pages, not knowing who to trust or believe. With the final reveal, I felt vindicated. And happily satisfied with how it all turned out. Yes, I had pretty much guessed who was behind it all, but seeing just how it all came together was fun to watch. 4.5 stars.

I received a copy of the e-Arc from NetGalley.