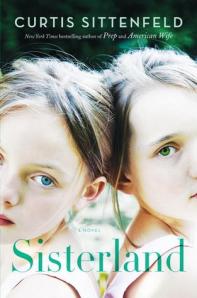 Violet and Daisy Schramm are identical twins. Growing up in St. Louis, MO, their lives are complicated by the fact that they are each gifted with psychic visions they call “senses.” But because of some unpleasant peer group experiences related to the “senses,” Daisy chooses to ignore and push down her abilities until finally, there is nothing (or very little) left. In fact, to further distance herself from this aspect of her persona, she starts going by her middle name (Kate).

Vi has always walked on the “wild side,” embracing her quirkiness and finally starting a business that features her “abilities.”

Kate has chosen a life that is as close to normal as she can manage, marrying stable, responsible Jeremy and being a stay-at-home mom of two young children.

The twins returned to St. Louis in their adulthood, and the issues between them are a source of dissonance, even though Kate tries to be a good sister. She seemingly goes out of her way to cater to Vi, almost as if her sister is disabled in some way. And it’s more than the fact that they’re twins, or even a situation that calls for loyalty. In many ways, it is patronizing.

Then one day, Vi publicly announces her premonition of an earthquake. Not a tiny one, but a large one, coming to St. Louis in October. On October 16, as a matter of fact. And suddenly the whole thing has turned into a major event, with media, Today show appearances, etc.

Narrated in Kate’s first person voice, we see everything from her perspective, and because it seems as though Vi is the weirdest, most annoying person in the universe, it is suddenly clear to me that what is missing from this rambling tale, with its numerous flashbacks, is Vi’s perspective. I would have enjoyed seeing a second narrator (Vi) to lend a little balance to Sisterland: A Novel.

Aside from the psychic plotline, however, there were intriguing glimpses into “marital politics,” with a stay-at-home dad who joins Kate at the park with their kids. Racial and mental health issues show up, with their mother’s “secret depression” being an ongoing presence in Vi and Kate’s growing-up years. The mother who mysteriously disappears behind her bedroom door every afternoon, leaving them to fend for themselves and their father. Did these events lead to the major splits between the girls as they grew into adulthood?

In fact, so many themes seemingly presented themselves throughout, but none were highlighted as much as the “senses,” which, to me, were the least interesting aspects of the story.

And nearing the end, an unexpected event wreaks another kind of upheaval in the lives of Kate and Jeremy, ultimately changing the landscape of their lives and their marriage. Perhaps the prediction was about this cataclysmic event, rather than an actual earthquake; a reminder that nothing in life is truly predictable, not even for those with psychic powers. I give this one four stars…halfway through, I was leaning toward 3.5, but the ending yanked me out of my lethargy and regained my interest.

9 thoughts on “CATACLYSMIC SHIFTS THAT ALTER LIVES — A REVIEW”

Leave a Reply to Rita (My Home of Books) Cancel reply