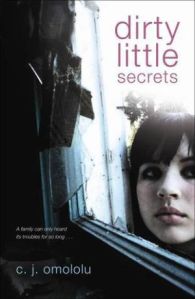 Sixteen-year-old Lucy lives two lives: the one at home, where she escapes to her room as a refuge from the rest of her house; and the one at school, with a best friend and possibly a boyfriend, neither of whom can ever come to her house, because Lucy’s mother Joanna is a hoarder. Not just someone who collects a lot of stuff, but someone who is gradually burying herself and her family in the cave of treasures she accumulates by ordering off the shopping network, going to every tag sale around, and bringing it all home with her.

The space is narrowing every day, with toppling stacks hovering in every available part of each room and blocking the hallways. The kitchen is filled with garbage and decaying food; the room reeks of putrefying things. In the living room, Joanna sits watching TV. She is angry, frustrated, and takes out her feelings on Lucy when she cannot find something. She, too, lives another life as an oncology nurse, kind and loving to her patients.

Is there any escape from the devastating mess and the terrifying isolation that locks these two individuals within a cocoon of horror?

Out of nowhere, seemingly, something does happen: a tragedy that fuels Lucy’s panic and propels her into a desperate sort of action. She sees that the only solution is to clean up the mess before she calls for help. Paced in increments of time marking the next 24 hours, we see Lucy’s futile attempt to make a dent in the morass of her life. And then…almost as if she is guided by some unseen force, she takes one final action to change her world forever.

Hauntingly emotional, pulling the reader right into the desperation that marks Lucy’s life, Dirty Little Secrets is a poignant reminder of the horrors of an existence that can claim the vulnerable and separate them from others.

The writer’s style and pace kept me turning those pages, but I would have enjoyed seeing more interaction between Lucy and Joanna before everything changed. Flashbacks give the reader a glimpse of what life might have looked like before the horror it became, and there were defining moments that apparently set the stage for what Joanna became, but the motivation seemed nebulous. Hoarding as a mental health disorder is definitely getting a lot of attention these days, and this rendition showed the teen point of view very well. Four stars.

6 thoughts on “LIVING IN A COCOON OF HORROR: A YOUNG GIRL’S INTERIOR JOURNEY”